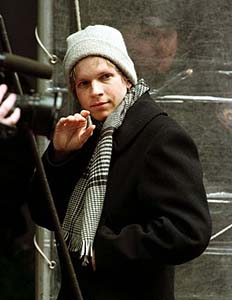 GRAMMY NOMINEE BECK ARRIVES FOR GRAMMY AWARDS…MSG01:GRAMMYS:NEW YORK,NEW YORK,26FEB97- Recording artist Beck arrives at Madison Square Garden February 26 for the 39th annual Grammy Awards in New York. Beck is nominated for a Grammy in the album of the year categroy for his recording “Odelay.” The Grammys will be broadcast live to a worldwide audience estimated at over one Billion viewers. fsp/Photo by Mike Segar REUTERS