This is my second year participating in Nanowrimo. I’ve been looking forward to it for months. This year I’m dragging other people kicking and screaming along with me because they’ve all expressed a desire to “have written” which is what Nano gives you.

Here are ten reasons why I participate.

1. Excuses. I don’t need an excuse to write, ever. But if I can find one, I’ll take it. Nano is your ultimate excuse to say, “We’re having take out again tonight! Also, you can wear those unwashed pants another 2 days easy!”

2. Shared Insanity. All year there are opportunities to collectively experience the highs and lows of writing, but during Nano, there’s a concentrated madness. More people are organizing writing sprints. More people are confessing their lack of proper hygiene. More people have that zoned-out faraway crazy-eyed look about them. Nanoers understand.

3. The Editor is Dead. My internal editor is a flaming asshole. I don’t know about yours, but I could write a single sentence and my internal editor would immediately cringe at the future horror of that one Amazon reviewer who will zero in on it with the words: “derivative cowardly pablum.” During Nano, the editor slowly but surely realizes she’s unwelcome and shows herself the door. By the end of Nano, I may have some derivative pablum, but I can promise it won’t be cowardly. It’s more likely to be unusable crazy talk, but I can work with that.

4. Deadlines. I love goals. Big goals, small goals, short goals, tall goals. I love them so much I have a google spreadsheet I created just for Nano that turns red when I’m behind, green when I’m on target, and blue when I’m ahead. Every day, I’m accountable to write a certain QUANTITY of words with no regard to QUALITY. And I know it all comes to an end in 30 days time.

Here’s my spreadsheet. If anyone wants to copy it, you can go here and save a copy to your drive. 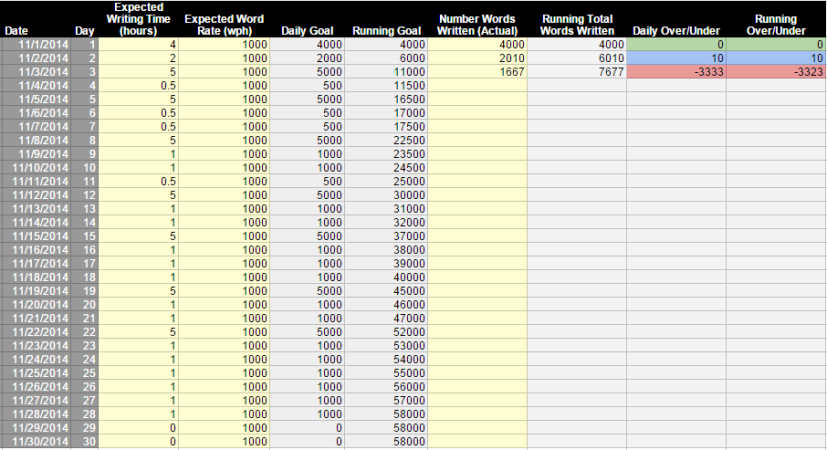 5. The novel. So 50K words does not a novel make. But it’s a start. I’ll aim for higher than 50K because I have the experience to know I can churn out shitty first drafts in short order. But even with only 50K words, that’s an amazing starting place. Last year, before I’d ever Nanoed, I thought noveling was a herculean task that only certain people could accomplish. I can attest to the confidence it will give any writer to just do it. Whatever quality it turns out to be, you will have written. And that’s a forward-propelling feat.

6. Trust in my own voice. I’ll confess this last was somewhat of an indirect benefit. What I wrote during Nano last year didn’t have the voice I’ve grown into. But it did show me that things I wrote came to life. People I created existed. Places were real. I don’t know if that’s a revelation to all new writers, but for me, once I got over that shock, I was able to stop writing every single detail, every character description, every minute of every day. I learned to trust my reader, and this gave me the freedom to trust myself. This didn’t pay off until I was working on my next finished MS, but this is a cumulative process.

7. Trust in future me. Future me is the same flaming asshole I kicked out before. I have to know that she’ll come back in December, have a look around and go, “Okay, we’ll start by cleaning up over there.” And we’ll get down to it and make something of the heap of words.

8. Unexpected plots and characters. I’m a pantser, and I love to see where a story will go and who will show up. There’s something about Nano that just invites weird random people into your story. Maybe it’s because it’s day 17 and you haven’t worked out where you want to go yet, so you put one word after another until your characters have decided to go to a hot dog eating competition where one of them is unexpectedly killed by a traveling shovel of doom. And you totally did not see that coming. Nano seems to bring on the weird and the unplanned.

9. New friends. At the end of the day, this is why I do practically anything online. I could write 50K words in November without calling it Nano, but the writing community is filled with so many awesome people. Every time I join a contest or participate in any kind of group event, I meet at least one new writer I can call a friend. Usually more. That not only makes this experience more fun, but it helps me in so many other ways. Writers are generous with their knowledge and experience and will help you out with brainstorming, character names, research, grammar points and some will even read your entire MS and become long term critique partners. Growing your circle of writer friends is a win even if you don’t end up finishing Nano.

10. The writing. If you just love to write, none of the above even matters. I Nano because I’m going to be writing anyway.

One thought on “Why I Nano – #Nanowrimo”