We’re so thrilled to reveal the cover

of debut author Kelly Siskind’s CHASING CRAZY, which releases January 12th from Forever Yours! We absolutely can’t wait for everyone to get their hands on this new adult contemporary romance. Check out the beautiful cover below, read a sneak peek, and enter to win a $20 Amazon gift card! 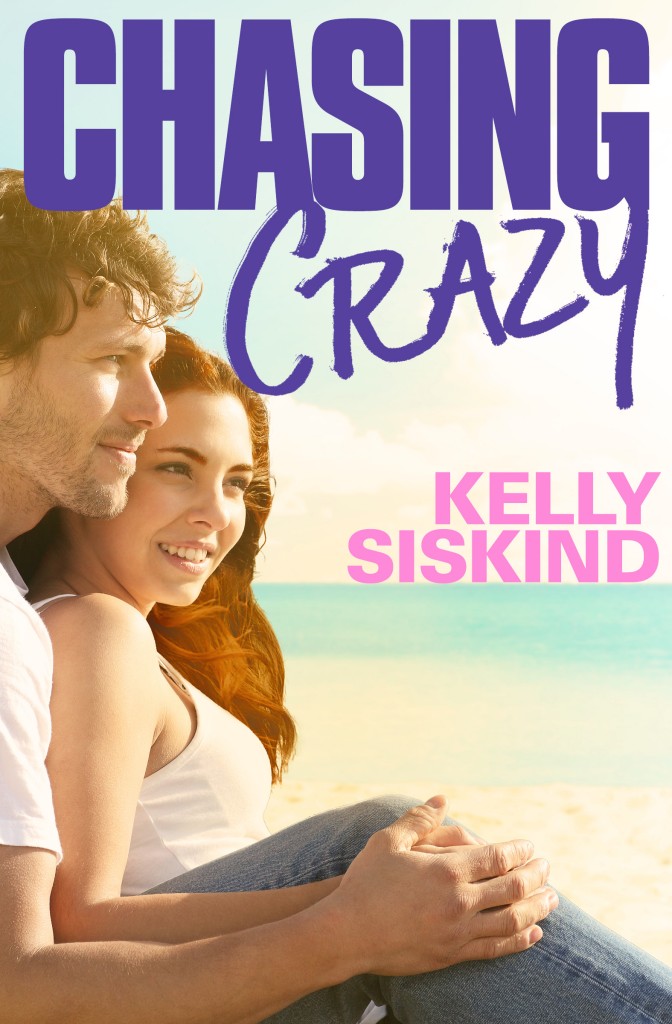 Dear Mom & Dad, I dropped out of school. I’m going backpacking. Sorry. Love you both.

At nineteen, Nina has endured two lifetime’s worth of humiliation. Tired of waiting for it to get better, she decides to get going-across the globe to New Zealand. There she soon faces what she most fears: a super sexy guy ready to be Nina’s next mistake.

Once Sam’s life was all about having fun. That was before the accident. Now his friends have bailed and his world is broken. But when a gorgeous girl on his flight looks at him with passion instead of pity, Sam feels his old self coming back to life.

Now traveling together, Nina and Sam know this isn’t just a fling. They’re falling fast, hard, and deep. More than anything, Sam wants Nina to forget her fears. But to help her do that he must reveal his own painful secret-and risk Nina never seeing him the same way again.

Frickin’ Hot Guy and his stupid hike. He thought his limp would slow us down, but I’m the one huffing and puffing, trying to figure out how I ended up on Mount Everest while in New Zealand. I chance a glance up, using the moment to inhale a mouthful of air. Sam leans over the edge, hands on his knees, grinning down at me. If there was ever a reason to summit a mountain, that face is it.

Sam, who I’m falling for. Sam, with that jaw.

Sam, who I’ll be sleeping with. In a tent. Alone.

Another five agonizing steps later, he’s got me by the shoulders, helping me up. In the blink of an eye, he has my straps undone and is easing the bazillion-pound weight from my back. The air still feels sharp in my lungs, like it could slice through me.

“Keep moving around,” he says. “Come on, let’s walk it off.” He grabs my hand and leads me over the rocky ground, the two of us walking in wide circles. After a few laps, the air is less daggerlike and my breathing slows. I blink at my surroundings. So focused on my aches and pains, I didn’t stop to soak in the landscape, if that’s what you’d call it. This is probably what the moon looks like. A few hikers passed us on the climb, but we’re alone in this crater, surrounded by jagged outcrops of brownish-black rocks and yellow tufts of grass, low mountains on all sides. It’s majestic and eerie and otherworldly, and I’m here because of Sam.

“Beautiful, isn’t it?” he asks. He’s still holding my hand as the silence engulfs us, my heart pounding in my ears.

The air is cold and damp. It alleviates the heat from that insane climb but doesn’t do much to quell the warmth between Sam’s hand and mine. Still, I don’t let go. And he doesn’t let go. I could stand here forever.

“Yeah, beautiful,” I finally say, no longer referring to the scenery.

Want to win a $20 Amazon giftcard from Kelly Siskind? You can enter to win on the Rafflecopter below!

She laughs at her own jokes and has been known to eat her feelings—Gummy Bears heal all. She’s also an incurable romantic, devouring romance novels into the wee hours of the morning.

She is represented by Stacey Donaghy of the Donaghy Literary Group.