You are here: Home / RWA, Pitch Wars, and Meeting my Agent

One of my critique partners asked me if I’d go to the big RWA (Romance Writers of America) conference in the summer if she went. While it sounded like a lot of fun, I’m tight on travel money and didn’t think it would be possible. I told her I’d go — if I had an agent by then. That seemed unlikely so it was an easy promise to make. Of course, as things in life happen, I was agented within the next couple of weeks. And so, I registered and began the process of counting the days.

Turns out a large number of friends I’ve made during Pitch Wars last year were also planning to go. These friends are all at various stages on the path to publication, from querying to having a book deal. Two of my friends were finalists for Golden Heart awards. We had a lot to celebrate. And also a lot to talk about. Apart from the critique partner who talked me into going, I’d never met a single one of these women. A year ago, I didn’t even know them. But over the course of the past year, we’ve shared so much in our tight-knit community, and it felt like I’ve known them forever. We fell into each other like old friends.

Night number 1: Those of us who came to the city on Wednesday managed to all get seats together at Finding Neverland — a musical about an author finding a story. How appropriate!

On the first day of the conference, I sat in on spotlights for publishing houses where editors talked about what they’re looking for. Like a pregnant woman who’s read EVERYTHING about what pregnancy is like and forgot to read anything about what it’s like to take care of a baby, I know way too much about querying agents and almost nothing about publishers. Sitting in on these panels let me see that editors are flesh and blood, love to read, love their jobs and want to find great stories. Still, given the opportunity to approach one in the wild, I opted to turn tail and run.

Night number 2: More of us had rolled into town, and we headed out to dinner and karaoke. The karaoke bar was perfect for encouraging those of us who love to sing poorly to give it a go. Hidden in the shadows, we belted out our sometimes off-key torch songs. Brenda Drake showed up, and we all got a chance to let her know how much Pitch Wars had meant to all of us. The group at the bar wouldn’t have been there together if it weren’t for her. After a few hours observing our antics, she called us over and, like Oprah Winfrey giving out cars, she pointed at three of us, “You’re a mentor! And you’re a mentor! And you’re a mentor!”

On the second day of the conference, I took a subway down to Union Square with one of my unagented CPs to meet my agent. I’d never met with her face to face, so this was exhilarating — exciting but nerve-wracking. Of course she was perfectly lovely. We got a chance to talk a bit about submissions, future projects, and thanks to my inability to socialize, the weather. My girlfriend got a chance to pitch her awesome book as well. And after, I got to spend some one on one time with my CP — who happens to be one of my favorite writers.

Said CP and I headed to RWA panels for the afternoon, sitting in on one focused on writing LGBT characters and another on writing diversity. Both were informative, and I already know of changes I need to make to a WIP that I wouldn’t have thought of if not for topics raised in these discussions.

Night number 3: Dinner with my besties. We didn’t get enough time together and the days were rushing past. There were many, many other Pitch Warriors who were dying of jealousy that they couldn’t be with us. And we missed them, but we enjoyed our time together. 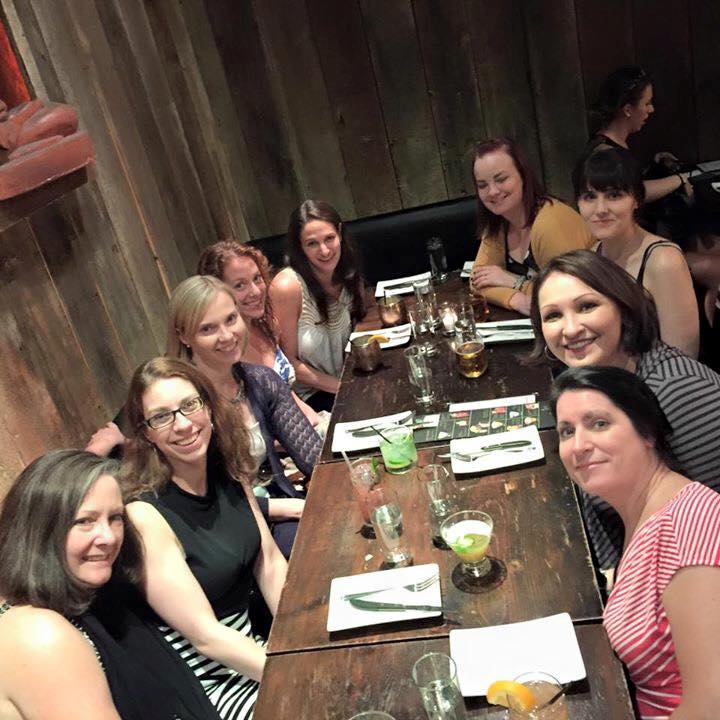 After dinner, several of us got booze and settled into our hotel room for a slumber-party-like giggle fest. That was the highlight of the trip for me. Love these ladies.

On the third and final day of the conference, I went to book signings (I did this periodically on each day, but was too exhausted by Saturday to do anything else). Long tables flanked these enormous rooms, and authors sat and signed stacks of books. I left the conference with a ridiculously huge number of awesome books I’ll eventually read when I run out of CP material. Then I went to lunch, then coffee, then dinner …. in a whirlwind of squeezing out every moment to be with my friends before the conference ended.

Night number 4: The convention culminated with the awards ceremony where RITAs and Golden Hearts winners were announced. We all gussied up and went out to support two of our friends who were hopefuls in the same category. Fingers crossed, we waited for the announcement. Unfortunately, neither were awarded the prize, but nonetheless, it’s a huge honor to be finalists. And with that and a few more drinks in our room, the conference came to a close.

All this to say — RWA was amazing, but more than that, I’m forever thankful I was picked to be in Pitch Wars last year. So much of my writing life has been improved from being in this community.